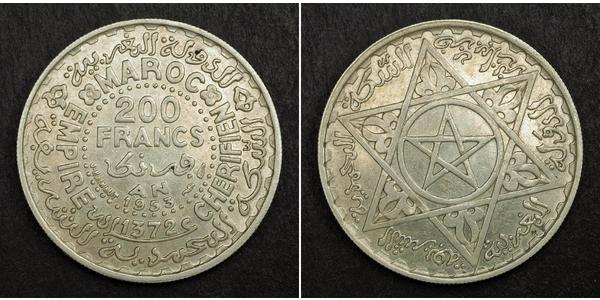 Morocco has a very important strategic location, as a gateway to   western Europe. This has resulted in the nation being attacked and   subjugated by many invaders from the Phoenicians and Romans to the more   modern French and Spanish. At the time of the mintage of this coin,   Morocco was under French control. Of interest, is the fact that Morocco   was the first nation to recognize the sovereignity of the United States   in 1777.

On 20 August 1953, the French who were occupying Morocco at the time forced Mohammed V and his family into exile on Corsica. A relative of his, Mohammed Ben Aarafa, was placed on the throne. Mohammed V and his family were then transferred to Madagascar in January 1954. Mohammed V returned from exile on 16 November 1955,   and was again recognized as Sultan after active opposition to the French   protectorate. In February 1956 he successfully negotiated with France for the independence of Morocco, and in 1957 took the title of King.