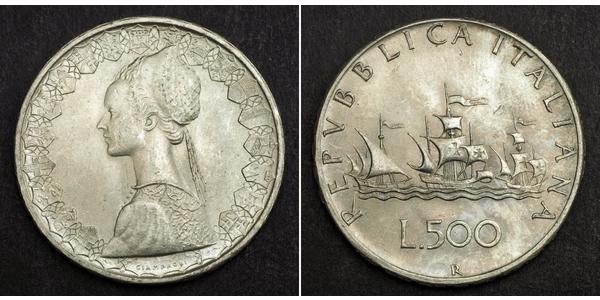 Obverse: Female bust left within a border of shields. Designer´s signature ("Giampaoli") below.

Christopher Columbus (c. 31 October 1451 – 20 May 1506) was a navigator, colonizer, and explorer from the Republic of Genoa, in northwestern Italy, whose voyages across the Atlantic Ocean led to general European awareness of the American continents in the Western Hemisphere. With his four voyages of exploration and several attempts at establishing a settlement on the island of Hispaniola, all funded by Isabella I of Castile, he initiated the process of Spanish colonization which foreshadowed general European colonization of the "New World".

Although not the first to reach the Americas from Europe—he was preceded by at least one other group, the Norse, led by Leif Ericson, who built a temporary settlement 500 years earlier at L'Anse aux Meadows — Columbus initiated widespread contact between Europeans and indigenous Americans.

The term "pre-Columbian" is usually used to refer to the peoples and cultures of the Americas before the arrival of Columbus and his European successors.

The name Christopher Columbus is the Anglicisation of the Latin Christophorus Columbus. His name in his native 15th century Genoese language was Christoffa Corombo), and the Italian language version of the name is Cristoforo Colombo.

Columbus's initial 1492 voyage came at a critical time of emerging modern western imperialism and economic competition between developing kingdoms seeking wealth from the establishment of trade routes and colonies. In this sociopolitical climate, Columbus's far-fetched scheme won the attention of Isabella I of Castile. Severely underestimating the circumference of the Earth, he estimated that a westward route from Iberia to the Indies would be shorter than the overland trade route through Arabia. If true, this would allow Spain entry into the lucrative spice trade — heretofore commanded by the Arabs and Italians. Following his plotted course, he instead landed within the Bahamas Archipelago at a locale he named San Salvador. Mistaking the lands he encountered for Asia, he referred to the inhabitants as "indios" (Spanish for "Indians").

The anniversary of Columbus's 1492 landing in the Americas is usually observed as Columbus Day on 12 October in Spain and throughout the Americas, except Canada. In the United States it is observed annually on the second Monday in October.