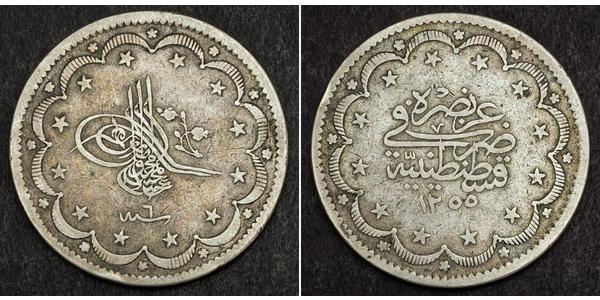 For  your Consideration a nice  20 Kurush coin, also  known as a Mecidi, after the name of Abdul Mejid, who established the currency reform in 1844. The coin was struck at the Qustantiniyah Mint (Constantinople) during the 8th regnal year of Abdul Mejid.

Abd-ul-Mejid (April 23, 1823 - June 25, 1861) was the sultan of the Ottoman Empire and succeeded his father Mahmud II on July 2 1839.  Mahmud appears to have been unable to effect the reforms he desired in  the mode of educating his children, so that his son received no better  education than that given to Turkish princes in the harem.

When Abd-ul-Mejid succeeded to the throne, the affairs of Turkey were in an extremely critical state. At the very time his father died, the news was on its way to Constantinople that the empire army had been signally defeated at Nezib by that of the rebel Egyptian viceroy, Mehemet Ali. The empire fleet was at the same time on its way to Alexandria, where it was handed over to the same enemy by its commander Ahmed Pasha, on the pretext that the young sultan's advisers were sold to Russia. However, through the intervention of the European powers, Mehemet Ali was obliged to come to terms, and the Ottoman empire was saved.

In compliance with his father's express instructions, Abd-ul-Mejid set  at once about carrying out the reforms to which Mahmud had devoted  himself. In November 1839 an edict known as the Hatt-i-sherif of Dulhane was proclaimed consolidating and enforcing these reforms. The edict was supplemented at the close of the Crimean War by a similar statute issued in February 1856.  By these enactments it was provided that all classes of the sultan's  subjects should have security for their lives and property; that taxes  should be fairly imposed and justice impartially administered; and that  all should have full religious liberty and equal civil rights. The  scheme met with keen opposition from the Muslim governing classes and  the ulema, or religious authorities, and was but partially put in force,  especially in the remoter parts of the empire; and more than one  conspiracy was formed against the sultan's life on account of it.

The more important measures of reform promoted by Abd-ul-Mejid were:

When Kossuth and others sought refuge in Turkey after the failure of the Hungarian rising in 1849, the sultan was called on by Austria and Russia to surrender them, but "boldly and determinedly" refused. He also would  not allow the conspirators against his own life to be put to death. The 1911 Encyclopedia Britannica says of him, "He bore the character of being a kind and honourable man,  if somewhat weak and easily led. Against this, however, must be set  down his excessive extravagance, especially towards the end of his  life."

He passed away in 1861 and succeeded by his brother, Abd-ul-Aziz, the oldest survivor of the family of Osman. He left several sons, of whom two, Murad V and Abd-ul-Hamid II,  eventually succeeded to the throne. In his reign the reckless system of  foreign loans began, carried to excess in the ensuing reign and  culminating in default, which led to the alienation of European  sympathy from Turkey and indirectly to the dethronement and death of Abd-ul-Aziz.