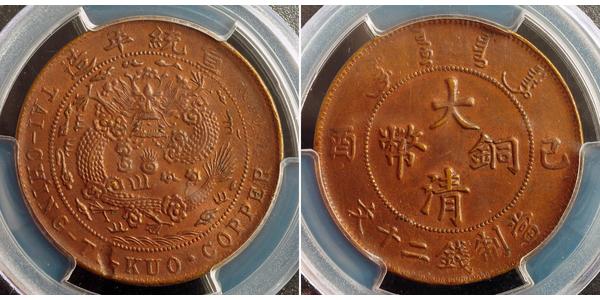 Still a child, he ruled as the Xuantong Emperor (simplified Chinese: 宣统帝; traditional Chinese: 宣統帝; pinyin: Xuāntǒng Dì; Wade–Giles: Hsuan1-t'ung3 Ti4) from 1908 until his abdication on 12 February 1912, after the successful Xinhai Revolution. From 1 to 12 July 1917, he was briefly restored to the throne as a nominal emperor by the warlord Zhang Xun. In 1932, after the occupation of Manchuria and Manchukuo was established by Japan, he was chosen in assuming the title of Chief Executive of the new state using the era name of Datong (Ta-tung). In 1934, he was declared the Kangde Emperor (Kang-te Emperor) of the puppet state of Manchukuo by the Empire of Japan, and he ruled until the end of the Second Sino-Japanese War in 1945.

After the People's Republic of China was established in 1949, Puyi was imprisoned as a war criminal for ten years, wrote his memoirs, and became a member of the Chinese People's Political Consultative Conference.