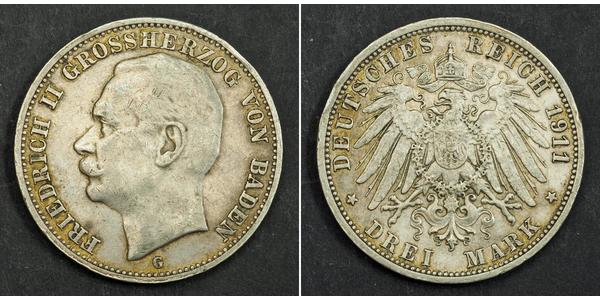 The Grand Duchy of Baden (German: Grossherzogtum Baden) was a historical state in the southwest of Germany, on the right bank of the Rhine. It existed between 1806 and 1918. The Grand Duchy of Baden remained a sovereign country until it joined the German Empire in 1871. After the revolution of 1918 Baden became part of the Weimar Republic as the Republic of Baden.

He became Grand Duke on 28 September 1907, after the death of his father Frederick I. He abdicated on 22 November 1918, amidst the tumults of the German Revolution of 1918-19 which resulted in the abolition of the Grand Duchy.

As a student at the University of Heidelberg, Frederick was a member of the Suevia Corps, a student organization.

After the death of his cousin Carola of Vasa, he became the representative of the descent of the Kings of Sweden of the House of Holstein-Gottorp.

On 20 September 1885 in Schloss Hohenburg he married Princess Hilda of Luxembourg, only daughter of Grand Duke Adolf. There was no surviving issue from the marriage.