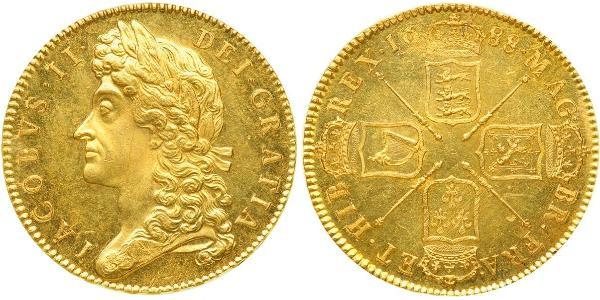 Full resolution: (1205 X 594pixels, file size: ~189K)
Great Britain. Five Guineas, 1688. S-3397A; Fr-292 (158); KM-460.1. 41.62 grams. James II, 1685-1688. Second Bust. QVARTO on edge. Laureate head left. Reverse: Crowned cruciform arms, with alternating scepters at angles. Trivial weakness at one shield and date, and a few adjustment marks hidden within the hair, otherwise choice strike, with prooflike fields and softly cameo devices. Remarkable preservation. Very rare thus. NGC graded MS-64 Prooflike. James was the third son of Charles I, the brother of Charles II, and as the Duke of York he was successor to the throne of England. The return of Charles II as king was met with apprehension by many Englishmen. And their misgivings were certainly fulfilled on his part by his absolutist leanings, his lack of responsiveness to Parliament, his favoring and promoting of alliances with the Catholic powers in Europe, and at home his toleration of Catholic dissent. A Parliamentary party arose in opposition to Charles, and more so to continued Stuart succession. And yet, civil war as a once again option never arose. The populace would rather have a monarchy, even with its faults, than return to the "republicanism" of the Commonwealth. Also, Charles was somewhat lazy and lackadaisical as a ruler, although surprisingly tolerant in many ways and occasionally he even showed a sharp political savvy. This certain degree of flexibility prevented the disaffected from acquiring pivotal political backing against him. James, on the other hand, was decidedly different from his brother. James, converting to Roman Catholicism probably around 1668, was stiff and humorless compared to his brother, yet a staunch, even ardent, supporter of his faith. Initially his accession was greeted with some enthusiasm, since his brother had left him the legacy of a strong executive office, with the added bonus of a loyal Tory-dominated Parliament. Opinion soon changed when in the first few months of his reign he was faced with a Protestant rebellion. The rebels were speedily put down, but in a particularly harsh and bloody manner. After this, James worked diligently to enlarge and strengthen the "royal prerogative" of old. Also he meddled extensively in local and town governments, interfering with the courts, all with the purpose of re-installing to positions of influence and power as many Catholics as possible in an attempt to turn England back to the Catholic faith. Topping off matters, his second wife provided him with a male heir, which could now interfere with Parliament's wish that James's Protestant daughter, Mary, succeed to the throne upon the death of her father. Within three years, both the old nobility and the emerging commercial class had been totally alienated by him. Likewise the Whig opposition of old now found themselves with ample Tory allies who had become disgusted with James. Seven Whig and Tory leaders sent an invitation to the Dutch prince William of Orange and his consort, Mary (Protestant daughter of James), to come to England. William landed at Torbay in Devonshire with an army. James's forces, under John Churchill (later duke of Marlborough), deserted him. James fled, was captured, and then was allowed to flee to France in December of 1688. James's flight was eventually termed an "abdication," and Mary and her husband were installed as the new sovereigns. In retaliation, James rallied together some Irish forces (which were supported by French troops provided by Louis IX), but they were soundly defeated by William's forces. Thereafter James lived the remainder of his life in France, dying in 1701. Estimated Value $30,000 - 35,000. Ex Millennia, Lot 335. Categories:
type to read more
Price 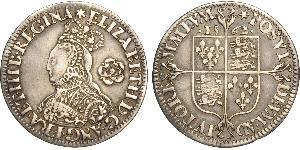 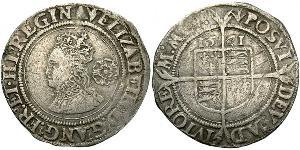 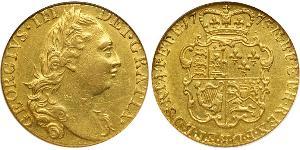 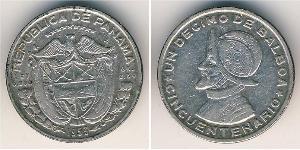 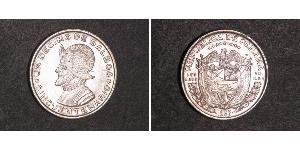