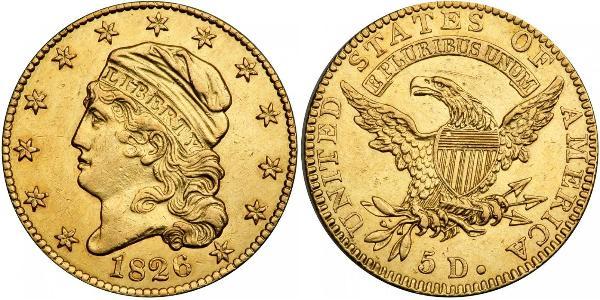 Full resolution: (1605 X 800pixels, file size: ~287K)
Description: 1826 PCGS graded Genuine AU Details BD-1 Rarity 5. Cleaning. A hint of gold tone and a nice looking coin. Light to moderate hairlines. Only 18,069 struck. Another of the rare dates in this decade, the most challenging series in all of U.S. numismatics. Claims that "most known examples are of the 1826 are Uncirculated, many of them gems," may be misplaced, but not completely untrue. The strike on this coin are nothing short of bold. In fact, of all the devices show complete detail, down to the eagles wing and neck feathers and the lines in the shield. Weighing it down somewhat is the old-time cleaning, but the surfaces, other than for a random mark here and there (and one thin scratch above the eagles head, are mostly devoid of blemishes. Rare high quality overall and a coin with outstanding historical importance (PCGS # 8135) . The Year 1826: In a letter to Madison in February 1826, five short months before the 6-foot-2 tall, red-headed ex Third President of the United Stated States died on July 4, Thomas Jefferson proposed selling some of his property through a lottery. Prior to the Revolution this was the practice, but fifty years on it required approval of the legislature. Jefferson's financial situation was precarious. In 1823 his debts totaled over $40,000, while his farms brought in a mere $10,000 yearly. Besides being the patriarch of a large clan, Jefferson entertained constantly at Monticello, and the cost of maintaining a county gentleman's life-style was becoming unsupportable. Shortly after his letter to Madison, a lottery bill was passed, but by that time news of Jefferson's financial straits had spread throughout the country, and people began sending gifts of money to their former President. Over $16,000 was raised in the 3 cities of New York, Philadelphia, and Baltimore alone. Jefferson called this a pure and unsolicited offering of love, adding, "I have spent 3 times as much money and given my whole life to my countrymen and now they nobly come forward, in the only way they can, to repay me and save an old servant from being turned like a dog out of doors." Both he and John Adams, the 5 foot 4 inch tall Second President of the U.S., died on the same day, July 4, 1826, fifty years to the day after the signing of the Declaration of Independence, and only a few hours apart. (Neither man was aware of the other's passing.). Estimated Value $7,000-UP. Ex: Purchased from Abner Kreisberg as "Unc" in the 1970's The Del Valle Collection. Categories: $5 Capped Head
type to read more
Price 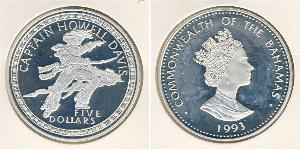