Full resolution: (1605 X 800pixels, file size: ~291K)
Description: 1825, 5 over 1 BD-1 Rarity 5+. PCGS graded MS-61. CAC Approved. The PCGS label shows "1825/4/1" on the holder. Mostly well struck and problem free with some light handling marks, none of which are worthy of mention. The lustrous surfaces exhibit prooflike reflectivity and tones to an extremely pleasing orange and rose color. According to renowned author David Akers, there are merely 35 to 40 examples of this date known to exist. However, the consensus today with numismatists is that Mr. Akers' estimated survival rate was slightly liberal and closer to 25 to 30 pieces are known to exist. Uncirculated examples of this rare date are seldom offered for sale. Considering the originality, eye appeal, and elusive nature, this coin would be an incredible addition to any serious collection. According to the latest information on this variety from the Dannreuther guide on early U.S. gold, "Walter Breen speculated that the original digit below the 5 [on 1825 BD-1] might be a mostly effaced 4. The author has carefully examined the Bass example and others and believes that this theory is correct! It would be illogical to keep an 1821 obverse die for such a long time before using it. If it was an 1821 die, why was it not overdated in 1822, 1823, or 1824?" Dannreuther goes on to report: "Comparison with the obvious 1825/4 overdate variety to follow (BD-2), the upright previously considered a 1 likely is a partially effaced 4. The part of the foot visible at the lower right of the 5 seems to be the foot of a 4. Another feature of this die that lends credence to this theory is the angle of the supposed 1. The angle of the original digit is exactly like the 4 on both the 1824 and 1825/4 obverse. It leans further left than the 1 on the 1821 die." Having cleared up that conundrum, this is precisely the kind of attractive toned example that will interest a wide multiplicity of collectors from the hardened numismatist assembling a complete date series, to the more casual buyer looking for a nice rare date specimen from the 1820s to represent this Capped Head style (last used in 1827). Most estimates peg the total number of survivors around 30. Akers described some decades ago some 10 offerings of Mint State coins over a 40 year period, and Breen accounted for 16 specimens known to him in 1966. The appearance of this rarity on the marketplace represents an excellent opportunity for the many cabinets which lack the 1825 date entirely. Pop 1; 4 finer, 2 in 63, 1 in 64, 1 in 65 (PCGS # 8133) . Estimated Value $30,000 - 35,000. Ex: Pine Tree's June 1975 Sale Lot 374 where it realized $8,500; believed to earlier have been in B. Max Mehl's Dunham 1941 Sale Lot 2098; Ex: Superior's Connoisseur's Collection Jan. 31, 1989 sale Lot 356 The Del Valle Collection. Categories: $5 Capped Head
type to read more
Price 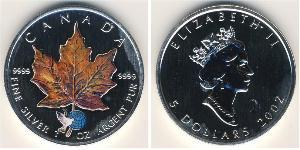