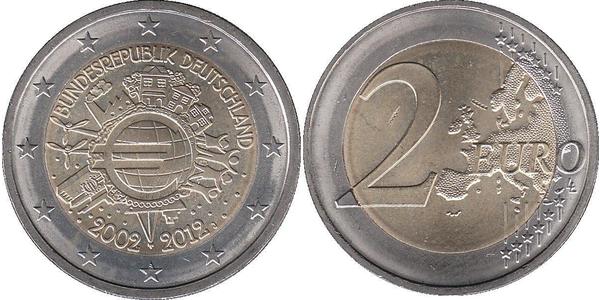 Full resolution: (1207 X 607pixels, file size: ~173K)
Description: 2012,
KM-306, Schön-296 Country Germany - Federal Republic (Germany) Year 2012 Value 2 Euro Metal Bi-Metallic Nickel-brass clad Nickel center in Copper-nickel ring Weight 8.5 g Diameter 25.75 mm Commemorative issue 10 Years of Euro Cash Obverse Coin features the world in the form of a euro symbol in the centre, showing how the euro has become a true global player over the last ten years. The surrounding elements symbolise the importance of the euro to ordinary people (represented by a family group), to the financial world (the Eurotower), to trade (a ship), to industry (a factory), and to the energy sector and research and development (two wind turbines). The designer’s initials, “A.H.”, can be found (if you look very carefully) between the ship and the Eurotower. Along the upper and lower edges of the inner part of the coin are, respectively, the country of issue and the years “2002 – 2012”. The coin will be issued by all euro area countries. The coin’s outer ring depicts the 12 stars of the European Union. Lettering: BUNDESREPUBLIK DEUTSCHLAND A.H. € 2002 2012 F Engraver: Helmut Andexlinger Reverse A map, next to the facial value, shows the European continent without borders. Lettering: 2 EURO LL Engraver: Luc Luycx Luc Luycx is the designer of the common side of the euro coins. Luycx is a computer engineer, and medallist living in Dendermonde, Belgium, and has worked for the Royal Belgian Mint for 15 years. He designed the euro coins in 1996.
type to read more
Online collections - Toolbar
Edit
Description: 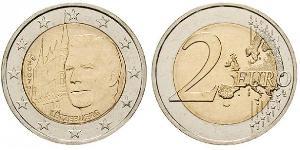