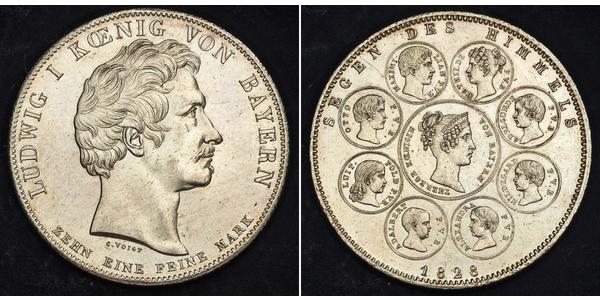 One-year type commemorating the Royal Family with their circled portraits surrounding the central portrait of Therese von Bayern. This beautiful coin cought the attention of Nicholas I of Russia, who ordered a similar piece to be struck, honoring his family. A decent specimen of this beautiful and popular type!

He was the son of Count Palatine Maximilian Joseph of Zweibrücken by his first wife Augusta Wilhelmine of Hesse-Darmstadt. At the time of his birth, his father was an officer in the French army stationed at Strasbourg. He was the godson and namesake of Louis XVI of France. On 1 April 1795 his father succeeded Ludwig's uncle, Charles II, as duke of Zweibrücken, and on 16 February 1799 became Elector of Bavaria and Count Palatine of the Rhine, the Arch-Steward of the Empire, and Duke of Berg on the extinction of the Sulzbach line with the death of the elector Charles Theodore. His father assumed the title of King of Bavaria on 1 January 1806.

Ludwig strongly rejected the alliance of his father with Napoleon I of France but in spite of his anti-French politics the crown prince had to join the emperor's wars with allied Bavarian troops in 1806 and under François Joseph Lefebvre in 1809. In 1817 Ludwig was involved in the fall of Prime Minister Count Max Josef von Montgelas. He succeeded his father on the throne in 1825.

Ludwig's rule was strongly affected by his enthusiasm for the arts and women and by his overreaching royal assertiveness. An enthusiast also for the German Middle Ages, Ludwig ordered the re-erection of several monasteries in Bavaria which had been closed during the German Mediatisation. He reorganized the administrative regions of Bavaria in 1837 and re-introduced the old names Upper Bavaria, Lower Bavaria, Franconia, Swabia, Upper Palatinate and Palatinate. He changed his royal titles to Ludwig, King of Bavaria, Duke of Franconia, Duke in Swabia and Count Palatinate of the Rhine. His successors kept these titles. Ludwig's plan to reunite also the eastern part of the Palatinate with Bavaria could not be realized. The Electoral Palatinate, a former dominion of the Wittelsbach, had been split up in 1815, the eastern bank of the Rhine with Mannheim and Heidelberg was given to Baden, only the western bank was granted to Bavaria. Here Ludwig founded the city of Ludwigshafen as a Bavarian rival to Mannheim.

Ludwig also encouraged Bavaria's industrialization. He initiated the Ludwig channel between the River Main and the Danube. In 1835 the first German railway was constructed in his domain, between the cities of Fürth and Nuremberg. Bavaria joined the Zollverein in 1834.

Ludwig supported the Greek fight of independence: His second son Otto was then elected king of Greece in 1832.

After the July Revolution in France 1830, his previous liberal policy became more and more repressive. The Hambacher Fest in 1832 showed the discontent of the population suffered from high taxes and censorship. In 1837, the Roman Catholic supported clerical movement, the Ultramontanes, came to power in the Bavarian parliament and began a campaign of reform to the constitution, which removed civil rights that had earlier been granted to Protestants, as well as enforcing censorship and forbidding the free discussion of internal politics. This regime was short-lived due to the demand by the Ultramontanes of the naturalization of Ludwig I's Irish-born mistress Eliza Gilbert (better known by her stage name Lola Montez), which was resented by Ludwig and the Ultramontanes were pushed out.

During the revolutions of 1848 the king was confronted with increasing protests and demonstrations of the students and the middle classes and also the Cabinet turned against him. Not willing to rule as a constitutional monarch, Ludwig abdicated on 20 March 1848 in favour of his eldest son, Maximilian. He was buried in St. Boniface's Abbey, Munich. 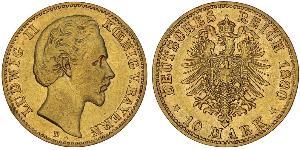 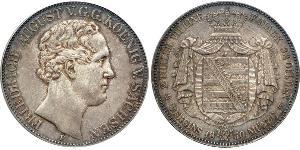