George II (George Augustus; German: Georg II. August; 10 November 1683 – 25 October 1760) was King of Great Britain and Ireland, Duke of Brunswick-Lüneburg (Hanover) and Archtreasurer and Prince-elector of the Holy Roman Empire from 11 June 1727 until his death.

He was the last British monarch to have been born outside Great  Britain, and was famous for his numerous conflicts with his father and,  subsequently, with his son. As king, he exercised little control over  policy in his early reign, the government instead being controlled by  Great Britain's de facto first Prime Minister, Sir Robert Walpole.

English
Coin variations: 20 instance(s)
Prices: 19 instance(s)
You may be interested in following coins 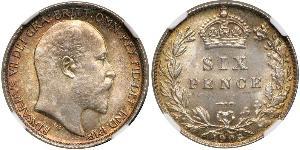