The goal of Christian Gobrecht's design was to make the $2.50 gold piece similar to the design of the larger gold coins of the day such as the $10 and $20 Liberty gold coins. Like the other Liberty gold coins, the obverse features Lady Liberty, whose hair is worn in a tight bun secured by a string of beads with loose curls hanging down her neck. She is wearing a coronet inscribed with the word Liberty; thirteen stars representing the thirteen original colonies and the date of issue surround her.

The reverse features a proud bald eagle with wings spread, standing among olive branches. The eagle clinches three arrows in his talons, and has a shield featuring stars and stripes upon his chest. The words UNITED STATES OF AMERICA, the denomination, and the Mint Mark surround the eagle.

The Philadelphia mint produced $2.50 Liberty gold coins every year of their circulation from 1840 through 1907. Before the Civil War, additional pieces were struck at Charlotte, Dahlonega, and New Orleans. 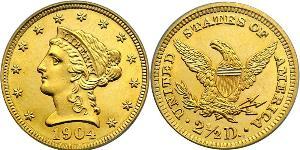