The Kreuzer, in English usually kreutzer, was a silver coin and unit of currency existing in the southern German states prior to the unification of Germany, and in Austria.

Early history
In 1559 a value of 60 Kreuzer to 1 gulden had been adopted throughout the Southern states of the Holy Roman Empire, but the northern German states declined to join, and used Groschen instead of Kreuzer. The Kreuzer in turn was worth about 4.2 Pfennig, or pennies. Thus one (golden) Gulden was worth 60 Kreuzer, or 252 Pfennig. Later currencies adopted a standard relationship of 240 Pfennig = 60 Kreuzer = 1 Gulden.
South Germany 1837–1873
The South German Currency Union of 1837 used a system of 60 Kreuzer = 1 Gulden and 1 3/4 Gulden = 1 Thaler, with the Kreuzer equal to the old Kreuzer Landmünze. These Kreuzer continued in circulation until decimalization, following German unification.
Austria–Hungary 1857–1892
Austria–Hungary decimalized in 1857, adopting a system of 100 Kreuzer = 1 Gulden, Austrian Florin or Hungarian forint, 1 1/2 gulden = 1 Vereinsthaler. It was known in Hungarian as krajcár (in contemporary Hungarian orthography: krajczár), in Czech as krejcar, in Slovak as grajciar, and in Romanian as creiţar or crăiţar.
You may be interested in following coins 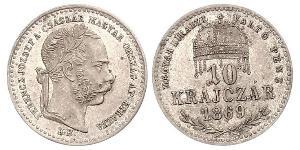 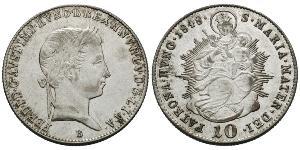 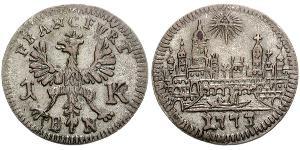 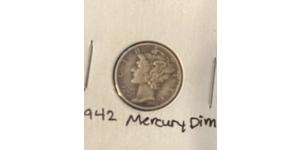