History
Names like Groschen, grossus/grossi, grossone, Grosz, Gros, Groš, Garas etc. were used in the Middle Ages for all thick silver coins, as opposed to thin silver coins such as deniers or pennies. Historically it was equal to between several and a dozen denarii.
The type was introduced in 1271 by Duke Meinhard II of Tirol in Meran. The 1286 example depicted here weighs 1,45 g, it is marked with ME IN AR DVS and a Double Cross (Obverse), and with DUX TIROL and the Eagle of Tirol (Reverse)
The name derives either from the crossus (double cross), or from grossus denarius turnosus (gross denier of Tours, gros tournois).
It was minted since the Middle Ages in the following areas:
Tirol (since 1271)
England (since 1279)
Bohemia (since 1300, the Prager Groschen, later adopted by most of the Central European countries)
Poland (since 1367, the Krakau Groschen, 3,2 grams of silver, an equivalent of 12 denarius)
Moldavia (since the reign of Petru I, 1375-1391)
Later the tradition of Groschen was dropped in most states while others continued to mint only coins smaller than the original coin. In Poland for example, since 1526 these included coins of 1/2 grosz, 1 grosz, 1,5 grosz, 2 grosz, 3 grosz, 4 grosz and 6 grosz. Their weight gradually dropped to 1,8 grams of silver and since 1752 they were replaced by copper coins of the same name.
In recent times, the name was used by two currencies in circulation:
In Poland a grosz (plural: grosze or groszy, depending on the number) is a 1/100 part of a Złoty
In Austria a Groschen (plural: Groschen) was a 1/100 part of a Schilling (1924-1938 and 1945-2001)
Likewise, in Germany Groschen remained a slang term for the 10 Pfennig coin, thus a 1/10 part both of the (West German) Deutsche Mark and the East German Mark. The word has lost popularity with the introduction of the Euro, although it can still be heard on occasion, especially from older people.
In Western Ukraine, grosh is still a slang term for the kopiyka, a 1/100 part of a Hryvnia. The Ukrainian word for money, hroshi, ultimately derives from this term also.
In Bulgaria, the grosh (Cyrillic: грош) was used as a currency until the lev was introduced in the 19th century. The term has been retained as a general word for a coin or currency in a number of money-related proverbs and sayings, and can also be regularly encountered in folk tales or stories set vaguely in the past.
In Israel ‘Grush’ (Plural ‘Grushim’) is used as slang for a small cost (“pennies”). This usage comes from the Yiddish used by Israel’s Ashkenazi population, ultimately deriving from its German and Eastern European origins.
In Germany, the name Groschen (both singular and plural) replaced Schilling as the common name for a 12 Pfennig coin. In the 18th Century it was used predominantly in the northern states as a coin worth 1/24 of a Reichsthaler (equal to 1/32 of a Conventionsthaler). In the 19th century, beginning in 1821 in Prussia, a new currency system was introduced in which the Groschen (often called the Silbergroschen or Neugroschen to distinguish it from older Groschen) was worth 1/30 of a Thaler (Taler). Following German unification and decimalization, the Groschen was replaced by the 10 Pfennig coin and Groschen remained a nickname for the 10 Pfennig coin until the introduction of the Euro. For the same reason, the name “Sechser” (sixer) remained in use regionally for the half-Groschen coin, 5 Pfennigs.
Austria introduced the Groschen in 1924 as the subdivision of the Schilling. It was restored, along with the Schilling, in 1945 and continued in use until the introduction of the euro in 2002.
You may be interested in following coins 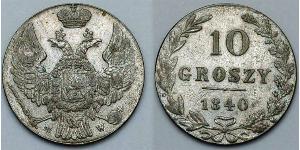 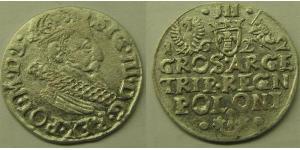 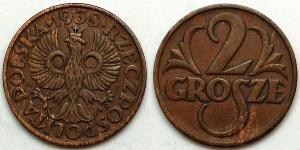