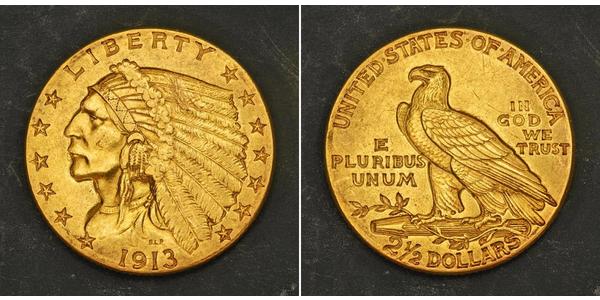 Reverse: Eagle perched on arrows, which are entwined by an olive-spray. Motto (E PLURIBUS UNUM / IN GOD WE TRUST) at sides, value (2½ DOLLARS) below. Legend: UNITED . STATES . OF . AMERICA

The Indian Head gold pieces or Pratt-Bigelow gold coins were two separate coin series, identical in design, struck by the United States Mint: a two-and-a-half dollar piece, or quarter eagle, and a five-dollar coin, or half eagle. The quarter eagle was struck from 1908 to 1915 and from 1925–1929. The half eagle was struck from 1908 to 1916, and in 1929. The pieces remain the only US circulating coins with recessed designs. These coins were the last of their denominations to be struck for circulation, ending series which had begun in the 1790s.

President Theodore Roosevelt, from 1904, vigorously advocated new designs for United States coins, and had the Mint engage his friend, the sculptor Augustus Saint-Gaudens, to design five coins (the four gold pieces and the cent) that could be changed without congressional authorization. Before his death in August 1907, Saint-Gaudens completed designs for the eagle ($10 piece) and double eagle, although both required subsequent work to make them fully suitable for coining.

With the eagle and double eagle released into circulation by the end of 1907, the Mint turned its attention to the half eagle and quarter eagle, originally planning to duplicate the double eagle's design. The Mint had difficulty fitting the required inscriptions on the small gold coins. President Roosevelt, in April 1908, convinced Mint Director Frank Leach that it would be a better idea to strike a design similar to that of the eagle, but below the background, to secure a high-relief effect. Such coins were designed by Boston sculptor Bela Lyon Pratt at the request of the President's friend, William Sturgis Bigelow. After some difficulty, the Mint was successful in this work, though Pratt was unhappy at modifications made by the Mint's engravers, headed by longtime Chief Engraver Charles E. Barber.

The two pieces were struck until World War I caused gold to vanish from circulation, and then again in the late 1920s. Neither coin circulated much; the quarter eagle saw popularity as a Christmas present. In 1933, President Franklin Roosevelt stopped the issuance of gold in coin form, and recalled many pieces which were in private or bank hands. 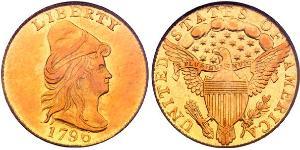