Obverse: Wreathed bust of Francis I as Emperor right. Mint letter (A) below.
Legend: FRANCISCVS I, D[EI] G[RATIA] AVSTRIAE IMPERATOR .
Translated: "Francis I, by the Grace of God, Emperor of Austria". 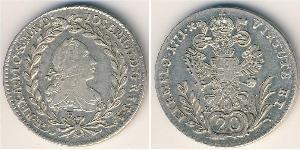