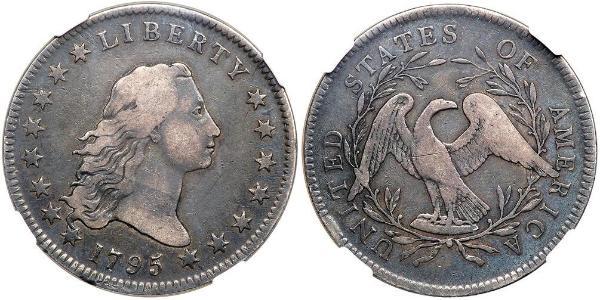 Version in höherer Auflösung: (1005 X 500Pixel, Dateigröße: ~136K)
Beschreibung: 1795. Flowing hair 2 leaves beneath each wing. B-9, BB-13. Rarity 4. NGC graded VF-35. Medium grey toning. Smooth surface with balanced, even color throughout, slightly lighter on the high point accents. A small mark on the eagle's breast noted. Exceedingly smooth fields on the obverse with some minor irregularity in the rim denticles below the date. Clear date, stars, and legends on this important Flowing Hair Type. Die Notes: Flowing hair in six curls; the third one from the top turns downward and touches the fourth curl defining this obverse which was used to strike BB-11, BB-12, and BB-13. Two points of first star touch the lowest curl which ends at star point. The last star or lowest one on the right is mostly under the bust, and a point nearly touches. Close date; outlines from repunching appear at top of 5 and right top of 7 (most visible on early impressions from the die). I closer to L than to B with L slightly low. On the reverse there are two leaves under each wing, 17 berries, nine of which occur on the left branch, eight on right. A berry is on the outside of the wreath midway between S and T of STATES, the only variety in which this occurs; the arrangement is similar to that used on the 1794 dollar. Reverse die used to strike 1795 BB-13 and BB-14. Estimated Value $4,000 - 4,500 Categories: Dollars
Mehr...
Preis