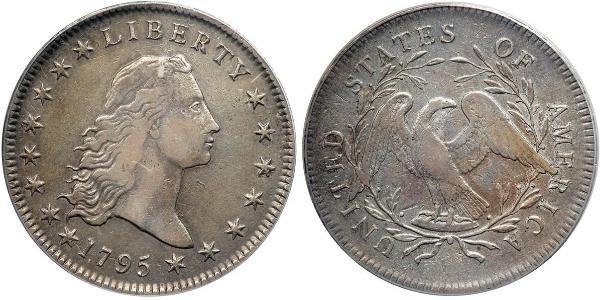 Version in höherer Auflösung: (1205 X 600Pixel, Dateigröße: ~167K)
Beschreibung: 1795 B-4, BB-14 Rarity 3. PCGS graded EF-40 PQ. Silver Plug. Housed in a new secure plus holder. With the addition of the Silver Plug this coin is quite possibly a Rarity 6 or 7. Pop 1; none finer at PCGS for the variety. Pleasing antique grAy tones with a trace of golden colors cover both sides. All the finer detail present with the sole exception of the hair waves below Liberty's ear due to the high relief on the die in this region. The Bowers Encyclopedia notes that the rims on this issue are higher than most other 1795 dollars, giving them a somewhat more "modern" appearance than the typical variety of this year. "Planchet adjustment marks are not often seen on BB-14." It may well be the 1795 BB-14 was included among the first dollars minted in 1795. As such it helps verify the varieties listed in Striking Period 1 were the first struck. On the Flowing hair style dollars, Liberty is facing right, flowing hair behind her head, LIBERTY above, date below, with stars arranged eight to the left and seven to the right. Reverse with eagle perched on a rock, enclosed by a wreath, open at the top, and with three leaves projecting upward beneath the wing of each eagle. Designer: Robert Scot. The Flowing Hair type was produced only in 1794 and 1795. No doubt a greater mintage would have occurred in the former year, except that a press of insufficient capacity was all that was on hand, and the coins could not strike up satisfactorily. Accordingly, mintage in quantity was postponed until proper equipment could be obtained in 1795. The Flowing Hair dollars encompass many interesting die varieties (PCGS # 39992) . Estimated Value $30,000 - 40,000. Ex: Hesselgesser Collection. Categories: Dollars
Mehr...
Preis 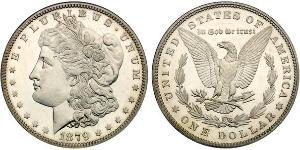