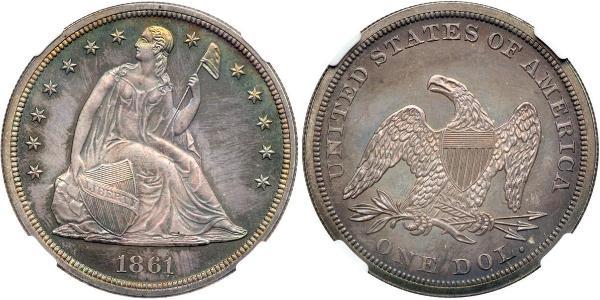 Version in höherer Auflösung: (1205 X 600Pixel, Dateigröße: ~147K)
Beschreibung: 1861 Liberty Seated Dollar. NGC graded Proof 66. Lovely rainbow toning. Only 1,000 proofs struck. Originality is a hallmark of both sides, with rich antique-copper toning that yields to warmer golden-apricot undertones as the obverse dips into a light, turning to greenish gold at the obverse rim. Full mirror reflectivity is also evident when the coin is held at the correct angles. Needle-sharp in all areas, and uncommonly pristine-looking for a Proof Silver Dollar of the No Motto type, last produced in 1865. The 1861 is an popular due to the rarity (and unavailability) of its identically dated business strike counterpart. When offered, the 1861 is apt to grade at best Proof 64. Gems are rare, and near-pristine Gems like this lovely Proof 66 are all but unobtainable at the two major grading services. Pop 6; 2 finer in 67. Historic note, 1861-65 American Civil War. One myth that has come out of some skewed histories of the Civil War is that the North demonstrated unifed support for Lincoln and his program. Yet some 200,000 Northern men, one out of seven in the entire U.S. Army, deserted. The source for this remarkable figure is none other than the U.S. government publication: The War of the Rebellion: Official Records of the Union and Confederate Armies. Estimated Value $20,000 - 24,000. Categories:
Mehr...
Preis 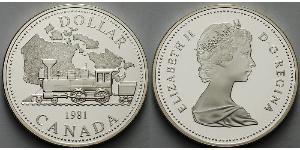