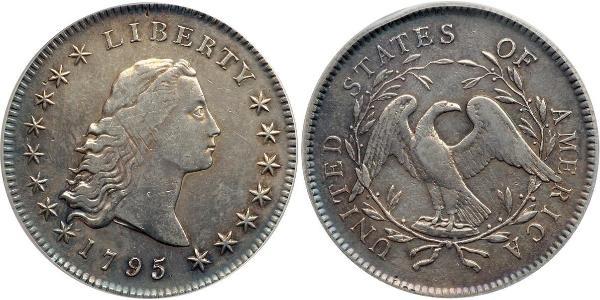 Version in höherer Auflösung: (1205 X 600Pixel, Dateigröße: ~151K)
Beschreibung: 1795 Flowing Hair Dollar. 2 leaves beneath each wing. ICG graded VF-30. Even grey toning deepening to blue at the borders. We note minor obverse adjustment marks across the hair. A very pleasing looking example. BB-20 is from Obverse 5 (per Bowers), previously used on BB-19 in which Liberty's flowing hair ends in six prominent curls. The lowest curl is pierced and separated by the innermost point of star 1, and the curl is continued upwards to almost close its loop. Wide date, the 95 closer together than the other figures. The obverse is paired with Reverse G which has a pair of leaves under each wing. A leaf ends directly below center of first S in STATES and another leaf ends just under left corner of upright of E in STATES. The wreath is delicate, leaves small, berries large. 19 berries arranged nine left, 10 right. Paired berries opposite I in UNITED, opposite A in STATES, under leaf below O in OF, and opposite I in AMERICA, on both inside and outside of wreath. This is one of just two 1795 reverses with two berries inside the branch near the eagle's tail (the other die is that used to coin 1795 BB-15 and BB-16). Estimated Value $4,500 - 5,000. Categories:
Mehr...
Preis