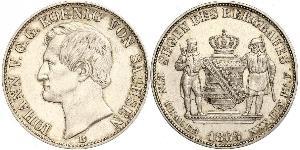 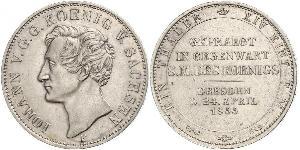 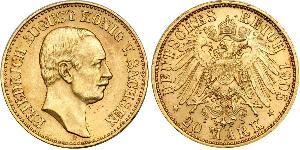 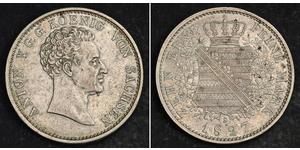 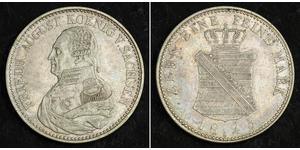 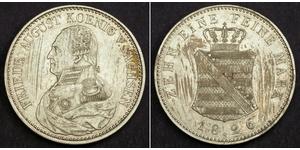 From Wikipedia, the free encyclopedia
Jump to: navigation, search
The subject of this article was previously also known as Saxony. For other uses, see Saxony (disambiguation).

The Kingdom of Saxony (German: Königreich Sachsen, Low German: Königriek Sassen), lasting between 1806 and 1918, was an independent member of a number of historical confederacies in Napoleonic through post-Napoleonic Germany. From 1871 it was part of the German Empire. It became a Free state in the era of Weimar Republic in 1918 after the end of World War I and the abdication of King Frederick Augustus III of Saxony. Its capital was the city of Dresden, and its modern successor state is the Free State of Saxony.

Napoleonic Era and the German Confederation[edit]

Before 1806 Saxony was part of the Holy Roman Empire, a thousand-year-old entity which had once aspired to be a single state, but had become highly decentralised over the centuries. The rulers of Electorate of Saxony of the House of Wettin had held the title of elector for several centuries. When the Holy Roman Empire was dissolved following the defeat of Emperor Francis II by Napoleon at the Battle of Austerlitz, the electorate was raised to the status of an independent kingdom with the support of France, then the dominant power in Central Europe. The last elector of Saxony became King Frederick Augustus I.

Following the defeat of Saxony's ally Prussia at the Battle of Jena in 1806, Saxony joined the Confederation of the Rhine, and remained within the Confederation until its dissolution in 1813 with Napoleon's defeat at the Battle of Leipzig. Following the battle, in which Saxony — virtually alone of the German states — had fought alongside the French, King Frederick Augustus I was deserted by his troops, taken prisoner by the Prussians[1] and considered to have forfeited his throne by the allies, who put Saxony under Prussian occupation and administration. This was probably more due to the Prussian desire to annex Saxony than to any crime on Frederick Augustus's part, and the fate of Saxony would prove to be one of the main issues at the Congress of Vienna. In the end, 40% of the Kingdom, including the historically significant Wittenberg, home of the Protestant Reformation, was annexed by Prussia, but Frederick Augustus was restored to the throne in the remainder of his kingdom, which still included the major cities of Dresden and Leipzig. The Kingdom also joined the German Confederation, the new organization of the German states to replace the Holy Roman Empire.

Austro-Prussian War and the German Empire[edit]

During the 1866 Austro-Prussian War, Saxony sided with Austria, and the Saxon army was generally seen as the only ally to bring substantial aid to the Austrian cause, having abandoned the defense of Saxony itself to join up with the Austrian army in Bohemia. This effectiveness probably allowed Saxony to escape the fate of other north German states allied with Austria — notably the Kingdom of Hanover — which were annexed by Prussia after the war. The Austrians insisted as a point of honour that Saxony must be spared, and the Prussians acquiesced. Saxony nevertheless joined the Prussian-led North German Confederation the next year. With Prussia's victory over France in the Franco-Prussian War of 1871, the members of the Confederation were organised by Otto von Bismarck into the German Empire, with Wilhelm I as its Emperor. John I, as Saxony's incumbent king, was subordinate and owed allegiance to the Emperor, although he, like the other German princes, retained some of the prerogatives of a sovereign ruler, including the ability to enter into diplomatic relations with other states.

End of the kingdom[edit]

Wilhelm I's grandson Kaiser Wilhelm II abdicated in 1918 as a result of Germany's defeat in World War I. King Frederick Augustus III of Saxony followed him into abdication and the erstwhile Kingdom of Saxony became the Free State of Saxony within the newly formed Weimar Republic.

The 1831 Constitution of Saxony established the state as a parliamentary monarchy.

The king was named as head of the nation. He was required to follow the provisions of the constitution, and could not become the ruler of any other state (save by blood inheritance) without the consent of the Diet, or parliament.[2] The crown was hereditary in the male line of the royal family through agnatic primogeniture, though provisions existed allowing a female line to inherit in the absence of qualified male heirs.[3] Added provisions concerned the formation of a regency if the king was too young or otherwise unable to rule, as well as provisions concerning the crown prince's education.[4]

Any acts or decrees signed or issued by the king had to be countersigned by at least one of his ministers, who thus took responsibility for them. Without the ministerial countersignature, no act of the king was to be considered valid.[5] The king was given the right to declare any accused person innocent, or alternately to mitigate or suspend their punishment or pardon them (but not to increase penalties); such decrees did not require ministerial co-signature.[6] He was also given supreme power over religious matters in Saxony.[7] He appointed the president of the upper house of the Diet, together with a proxy from among three candidates suggested by that house,[8] and appointed the president and proxy of the lower house, as well.[9]

The king was given sole power to promulgate laws, and to carry them into effect, and only by his consent could any proposal for a law be advanced in the Diet.[10] He equally had authority to issue emergency decrees and even to issue non-emergency laws that he found needful or "advantageous," though such instruments required the counter-signature of at least one of his ministers, and had to be presented to the next Diet for approval. He could not, however, change the constitution itself or the electoral laws in this manner.[11] He was permitted to veto laws passed by the Diet (though he was required to give his reasons for so doing, in each instance), or to send them back with proposed amendments for reconsideration.[12] He was permitted to issue extraordinary decrees to obtain money for state expenditures refused by the Diet, through the Supreme Court, though such decrees could only last for one year.[13] He was permitted to dissolve the Diet, though new elections for the lower house had to be held within six months; he was also permitted to convoke extraordinary sessions of the legislature at his discretion.[14]

From 1697 the Kings of Saxony became Roman Catholic in order to accept the crown of Poland, of which they were kings until 1763. The royal family remained Roman Catholic, ruling over a domain that was 95% Protestant.

The ministry was defined in the constitution as consisting of six departments, all of which were made responsible to the Diet:[15]

Members of the ministry had the right to appear in either chamber of the Diet at will, and there to participate in debate, but upon a division of the house they had to withdraw.[16]

A Bill of Rights was included in the constitution. It incorporated:[17]

The Diet, or legislature was divided into two houses, which were constitutionally equal in their rights and status, and neither house was to meet without the other.[18]

The upper chamber consisted of the following:[19]

Members of this house held their seats so long as they remained qualified to do so under the constitution, or in certain cases until they had reached the age of sixty or participated in three sessions of the Diet.[20]

The lower house of the Diet consisted of:[21]

A proxy was to also be chosen for each representative, who would take the representative's place, should they be incapacitated, absent, resign or be removed.[22] Each representative was elected for nine years; however, approximately one-third were required to resign their seats every three years (the exact figures were set in the constitution, and determined by lot at the commencement of the first session of the Diet), though all were eligible for immediate re-election.[23] The lower house was to nominate four members, of whom the king was to choose one to be president of that house, and another to be his proxy.[24]

Members of the Diet must be at least 30 years of age; electors must be 25 years of age, not have been convicted of any offense in a court of law, not have their personal estate financially encumbered in any way, and not be under guardianship.[25]

The Diet was required to consider any business laid before it by the king, before proceeding to any other business.[26] Members were to vote their consciences, and were not to accept instructions from their constituents.[27] Members were granted full freedom of speech in the chambers, but were not permitted to insult each other, the king, any member of the royal family or the parliament. Members who violated any of these rules could be disciplined by their respective house, up to and including permanent expulsion with ineligibility for re-election.[28] The Diet could propose the formation of new laws or changes in existing ones, but no bill could be brought forward without the king's express consent.[29] Conversely, no new law could be enacted, without the Diet's consent.[30]

Bills could be passed by a simple one-third-plus-one vote in both houses of the Diet; a majority vote was not necessary in either house.[31] Any bill rejected or amended must contain a statement of why it was rejected or amended.[32] No new taxes could be imposed without the Diet's consent,[33] though the king was permitted to bypass this in certain instances.[34] The parliament could impeach members of the ministry by unanimous vote of both houses;[35] ministers so impeached were to be tried by a special court; the decision of this court was final, and even the king's right of pardon did not extend to persons convicted by it.[36]

In the wake of the tumultuous 1848 revolutions, Saxony's Landtag extended voting rights (though still maintaining property requirements) and abolished voting-taxes. In 1871, Saxony was incorporated into the German Empire and more voting rights were gradually extended. By the early 1900s, Saxony's local politics had settled into a niche in which Social-Democrats, Conservatives, and National-Liberals were splitting the share of votes and Landtag seats three ways. (In 1909: Social-Democrats won 27% of seats, Conservatives won 31% of seats, "National-Liberals" won 31% of seats). Voter participation was high (82% in 1909).

The judiciary was made independent of the civil government,[37] The High Court of Judiciature, created in Sections 142 to 150 was also given authority to rule upon "dubious" points in the constitution; its decision was decreed to be final, and was protected from royal interference.[38]