The stater (Ancient Greek στατήρ, literally ‘weight’) was an ancient coin of macedonian origin which circulated from the eighth century BC to 50 AD. It was also heavily used by Celtic tribes.

Original mintings of this coin such as practiced in Athens valued the stater at a tetradrachm (4 drachms), though issues at other places or times applied the word “stater” to a didrachm (2 drachm) coin. The stater was also minted at Corinth. Staters were also struck in some of the Mediterranean islands such as Aegina and Kydonia. For example, one silver coin struck in Kydonia was that of a stater featuring the Minoan goddess Britomartis.
There also existed a “gold stater”, but it was only minted in some places, and was mainly an accounting unit worth 20-28 drachms depending on place and time, the Athenian unit being worth 20 drachms. (The reason being that one gold stater generally weighed roughly 8.5 grams, twice as much as a drachm, while the parity gold:silver, after some variance, was established as 1:10) The best known types of gold staters are the 28 drachm Kyzikenos from Cyzicus, and the gold staters minted in Gaul that Gallic chiefs modelled after those of Philip II of Macedonia, which mercenaries brought back West after serving in his armies, or those of Alexander and his successors.
You may be interested in following coins 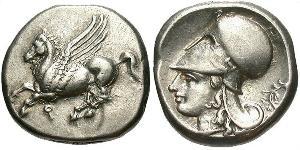 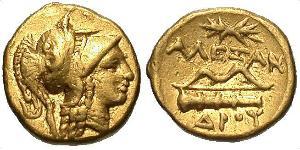 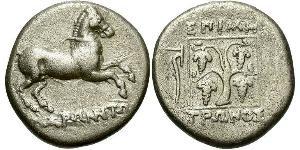 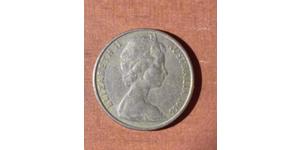 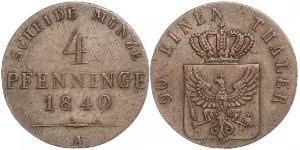